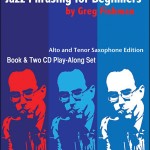 Greg Fishman has a number of excellent books out. I’ve reviewed and highly recommend his Jazz Etudes Book Vol. 1 and Vol. 2 and his Saxophone Duets book. His latest book is Jazz Phrasing For Beginners, which is aimed at the beginning student. It contains 10 melodic tunes that great examples of idiomatic “classic” jazz tunes such as “C Jam Blues” and the like. The tunes are great studies in good voice leading and use of jazz rhythms. Also great motivic (or sequential) development. You get 2 CDs with the book. One CD that has Alto Sax demos and backgrounds, and one that has Tenor Sax demos and backgrounds.

As a book for someone who is just starting to play, this would be a good first book before diving into something like Jim Snidero’s Jazz Conception Easy. The etudes are short, and emphasize excellent idea development. However……
END_OF_DOCUMENT_TOKEN_TO_BE_REPLACED

Greg Fishman has been at it again. This time, he has come out with yet another book of Jazz Etudes. Again, he has named each Etude after a street in Chicago. I’ll just take Greg’s books in lieu of a tourist map if I ever visit Chicago. Really. I believe he’s covered every major street in the town, or at least the ones worth mentioning.

Back to the latest book. Greg says “I think that the new etudes are even more melodic than they were in the first book.” Eh, well, perhaps. The tunes in the last book were pretty good as well. I think my gripe with the first book carries over into the second book, i.e. still not a lot of explanation about voice leading. Perhaps that will be in a forth coming tourist’s guide to voice leading? How many streets does Chicago have? Are we going to run out if you do a voice leading book and another etude book?

For $19.95, with two CDs (one for Tenor, one for Alto) that have an etude track and a track where you can blow a few choruses, it is a simple choice. Duh! Get the book! 10/10 for the price, and the quality of the tunes.

(P.S. Greg Fishman is moving to Phoenix, Arizona. Why anyone would want to move there is beyond me. It gets so hot it can melt your dashboard. This last summer I think they had weeks of triple digit heat. My mom visited my brother who lives there, and she said it was like being in an oven the whole time she was there. Anyhow, I’d expect to see the next etude book filled with Arizona street names, assuming Fishman runs out of Chicago streets)

Greg Fishman has released a great new book titled Jazz Saxophone Etudes. What sets this book apart from others is the addition of two CDs, one for Alto and one for Tenor. You use the same etude for both instruments. So, you don’t have to deal with bad transposition jobs that you find in say, Bob Minzter’s books. Plus, the CDs feature extended rhythmn section only parts that allow you to stretch out and play on the tunes.

The tunes are based on standard changes. There are two blues etudes, two rhythmn changes etudes, and etude based on the changes to “A” Train, etc. All the etudes are named after streets in Chicago, which figures as Greg Fishman is from Chicago.

The one thing I would want more of in the book is voice leading. It would have been great to include the voice leadings to the solos, along with some analysis of what was used. It was mentioned briefly in the front of the book, then….nada. It would really make this book stand out if it had detailed, one page sheet on the voice leadings used in the solos. Anyhow, I’ve done a bunch of them for my students so they can see how he constructed the solos.

Rating for this book. 10/10. For $20, this book rocks. You get excellent solos, great sounding CDs, and a lot of information. Go get it!