PG Music has been hard at work, and released Band in a Box 2014 for Windows yesterday. Notable features include:

One thing PG Music did was “overhaul” the interface. It’s really hard to tell exactly what they mean by this, as there are no screen shots I can find. Sort of looks Microsoft Office like I would say in it’s use of ribbon like things. They eem to have put a tab thing in the upper right where you can easily switch to the mixer and some other views (like Piano to see what notes are being played). A lot of this new UI stuff seems to come at the cost of seeing the actual chords on the screen. I hope there is a way to toggle back some of those Microsoft Office like ribbons. And then there is the “handwritten font” thing. I’m not a fan of that faux handwritten stuff anymore. It’s too 1990s for me.

So, should this be on your late Chanukah/Christmas list? Absolutely. Anyone who plays music should have this program. Are you working on solo changes? Working out a new chord progression for a song? Just want to explore what Giant Steps would sound like as a Country Bluegrass song? Then get this program. It’s a tool that you will use countless times.

Today, MakeMusic announced that Launch Equity will purchase the company.  You can read MakeMusic’s press release here.   Launch Equity proposed the buyout last July (July 15, 2012), with the intent of taking the company private and then investing money into the company for a new CEO as well as updating software (particularly Finale’s base code).

(Via Technology in Music Education)

This is great news considering Avid is falling off a cliff and the development team of Sibelius was sacked and have started a new project with Steinberg.

However, this did crop up. Seems everyone isn’t happy about this.

This is kind of old, but it’s an awesome site (was cleaning out things I flagged in Google Reeder)

The MPV Hub is free educational resource for Mac users:

It’s a free resource developed for the Mac creative community. You can use the MPV Hub to find written articles about how to use software, short tutorial-video tips & tricks, interviews with industry experts, product reviews, and other article. 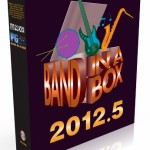 This week has been amazing. First, on Wednesday, we had Apple announce the iPhone 5. On Friday, PG Music unleashed Band in a Box 2012.5 for Mac. I shudder to think what next week will bring (other than actually receiving an iPhone 5 on Friday!).

Like the iPhone 5, Band in a Box 2012.5 is more tweaking of an already great product. I still am surprised that more musicians do not know of this amazing piece of software. Or maybe still dismiss it as this midi tool (which it was back in the 90s) that uses Quicktime to generate cheesy backgrounds. It is not that. These people also probably still believe we didn’t go to the moon.

Band in a Box, if you read this site, I always rave about. For anyone learning jazz, or just music in general, it is an invaluable tool. You simply type in a chord progression, tempo, key (if you want), and then pick a style. There are sooo many styles. There are quite a few midi only tracks that, depending on your setup, can sound very very good. But the program has really shines in it’s use of “RealTracks”. The software pretty much seemlessly takes real performances and will piece them into the song. So, if you wanted your masterpiece in the key of Db in the style of a Pop song with Electric keyboard, fretless bass, drums, and a Smooth sax soloing….it can do this. And it sounds damn good. Every version of the program, like every revision of the iPhone, tweaks and improves upon what they had before.

New things in this version of Band in a Box:

There were some other tweaks to the program to. There is a simplified saving to M4A or AIFF from the File Menu (though I did want this to be a pop up dialog in the beta test so you could easily select say a DropBox folder to save them to rather than the program just dumping it into folder where the source file exists. Last beta still did it that way :-(). The program does load a little faster than the 2012 as well.

There are still some annoyances. I swear every beta test I am involved with, I complain about the “Open Song By Title” thing, which will display the song title, file name, if it has a melody, and the style. Great tool. Except the Windows version will traverse folders in that folder (nested folders), and the Mac version just does the files in the folder. So the 10,000+ Band in a Box files I have would have to be all in ONE folder instead of sort of organized into subfolders.

Another annoyance, or rather, something they need to bring to the fore in the program is the “Woodshed Tempo” thing. It is buried in Preferences 2 in the program. Basically, what it does is that every time you end a loop of a song, say you get done with the 5 choruses of Giant Steps at 160, it will bump up the next loop of the song by a certain number of beats per minute. So you can practice changes to a song, and start it at say 140, and have it bump up every loop by 10 clicks every time. Amazing for practicing. I keep lobbying for them to make a button for this, or at least make it so it’s not buried in the program. It’s a great tool to use…..and few seem to know it’s there.

So, the verdict. Of course it is a BUY. If you are learning music, and specifically, Jazz (or soloing), you need this tool. And you need to splurge and get ALL the real tracks (or AT LEAST the styles you like). The BEST version to get is the Hard Drive version, which PG Music will send you a hard drive that has lots of extra space, and the program and all the styles and real tracks. And it’s portable, so you can take it between home and the studio, or use it on another computer. The program takes something like 65 gigs to install.

Yes, it is expensive to get the whole thing. But like any good tool, it is an investment. And PG Music’s upgrades are very reasonable (usually the upgrades to all the new real tracks and stuff is $129).

Get this program. Or put it on your Christmas list.

Thing-1TM – MIDI Performance System
Thing-1 is a software MIDI wind controller for woodwind players offering a new range of musical expression to anyone who can play the saxophone, flute, clarinet, or recorder.”

Basically, it is a real time Pitch (monophonic) to Midi program. Yes, there are other ones out there like Pyrolators Max for the Max/Msp sytem, or WIDI Audio to Midi AU, or even Blue Cat’s Digital Peak Meter Pro that do similar things as this program. There are probably other things as well. This is not an area that I know much of, but it is interesting stuff. I’ll have to look into stuff like this. Looks fun.

The world of programs to slow down songs to figure them out has another member, Capo ($49). Right off the bat, this program has a great interface.

Yet…..for a $1 more, you can get Transcribe, which might not have the amazing Mac interface, but has way more functionality….like using the markers to divide up the beats between measure markers. Or the spectrum analysis (which is EXTREMELY helpful).

So, while I like Capo’s feel, for the same price, you can get Transcribe….which is better. Maybe if they dropped the price to $25 or so, it might be worth having in the arsenal. But not for $49 when there is something way better for that price.

I would tend to agree, though the game and Guitar Hero have exposed people to some great, classic music that they would not have known otherwise. I’d rather have kids and people listen to some of the tunes on Guitar Hero/Rock Band than some of these “rap artists” and whatnot.

Also, on a related note, anyone who has Rock Band and the drum set should check out this. You can use the Rock Band drum controller (the newer one that comes with World Tour) with this piece of software and actually play the instrument. Very cool.

PGMusic announced today that they are out with the latest, greatest version of BinaB for Windows (no new Mac version yet). Nothing really “whoa” in this version, other than if you upgrade from the previous version you can get ALL the RealTracks. Some of the highlights of the update I found interesting are:

Best deal for previous owners is the $139 USB hard drive “UltraPlusPAK” or the “EverythingPAK”. You really don’t want to download it. I did…it was painful. Band-in-a-Box is a great program, on any platform for people wanting to practice changes, songs, or even use it for composition. I couldn’t count the times I’ve used BinaB generated drum and bass parts (and sometimes piano) for arrangements…..

Santa says go get it!

Sibelius 6 has just been announced. I’m not seeing much that makes me go “whoa” like when they put in Parts and Score linking. The noteworthy features I saw are:

They also seem to have snagged some of Finale’s “features” like Sing in Music, Slurs, chords, putting dynamics in based on how hard you played. Go check it out.

Keeping its promise to ship Pro Tools 8 in December, Digidesign announced that Pro Tools 8 is shipping. However, it is just DOWNLOADABLE right now. This is what you get (if you have M-Powered Pro Tools)

A good 11+ gigabytes to download :-(. Thanks Digidesign. You should at least have taken $20 or so off the price.

Anyhow, SSL Pro Convert seems to be a piece of software that sounds like it would overcome this problem. Not sure how much they are going to want for something like this, but it might be worth it to some people. Though, that new M-Audio interface, coupled with Protools looks real tempting.

Last year, I didn’t do a Christmas guide. This year, I am going to. What holiday gift would you get your favorite saxophonist(s) this year. Here are some ideas.
Under $100

The Sky Is The Limit

Any other gift ideas?

This was posted yesterday on PGMusic.com.

We’re looking for current users of Band-in-a-Box 2007 to help us test some of our latest features. In order to qualify as a beta tester, you must be:

Seems the Macintosh version will languish another year without an update (yet again). Wonder what is going to be in the new version. Last year, they introduced RealDrums into the program. This year? I don’t know, but lets speculate a little.
END_OF_DOCUMENT_TOKEN_TO_BE_REPLACED

I came across Create Digital Music’s discussion of Native Instruments BeatPort SYNC. It has a lot of interesting features such as:

For me, the time-stretching function would be welcome. Currently, if I need to slow something down, I have to drag it out of iTunes into Transcribe. That works well, but being able to do it within the program would be so much easier.

Alas, I wasn’t able to test it as it loaded fine, but proceeded to try to analyze my iTunes library, which, in it’s current size, could take days to do. But, this might be a good alternative to people who need pitch and tempo controls and like the iTunes type interface (who wouldn’t??)