I first posted about this back in December. Some guy bought a saxophone and had Kenny G sign it and wanted $1600.

Well, lo and behold, it is now been marked down to $1000. This is the star power that the might G brings to the table……NOT. 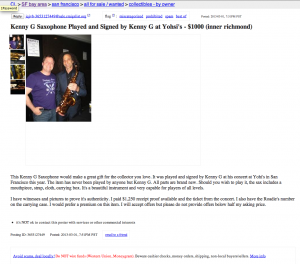 So, this was on my local Craigslist this morning. Seriously. Sad. 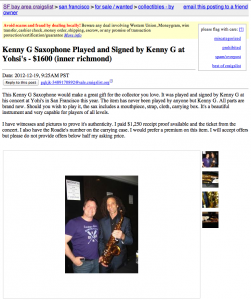 Last Friday Night by Katy Perry……Saxophone solo isn’t really right yet. Will fix it at some point.

Last Friday Night by Katy Perry for Eb Instruments (100.9 KiB, 651 hits)
You do not have permission to download this file. Go register first.

Last Friday Night by Katy Perry for Bb Instruments (99.1 KiB, 389 hits)
You do not have permission to download this file. Go register first.

There is a good reason for posting this….other than it has Katy Perry in it. It’s towards the end……something when the parents get home and Uncle Kenny….

This actually explains so much about Kenny G…….

Blender.com, a great music music site, published a great list in 2003 of “The 50 Worst Artists In Music History“. While I don’t agree about #16, Oingo Boingo, I do agree with #4, Kenny G.

They also have some interesting comments about Jazz Fusion

"It's a rule of thumb that any music that uses jazz as a prefix will make you want to saw your head off in boredom (see also: jazz-funk, jazz rap, jazz house). But none is as wearying as the genre that thought what rock really needed was month-long bass solos and time signatures Stephen Hawking wouldn't understand.

Cut them some slack, they did publish a fairly good jazz list a while ago. They did nail the Kenny G thing though, I’d have put him as #2. And a newer list would have Paris Hilton and Ashlee Simpson I’m sure….