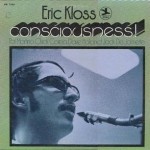 One thought on “What Ever Happened to Eric Kloss?”