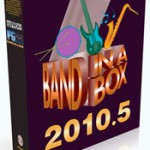 PGMusic just released Band In A Box 2010.5 for the Mac. Improvements? Yes, several. Here are a few that I think are noteworthy:

Plus, you get a bunch more RealTracks. One of the Paks comes with some B3, and other has some excellent Jazz Guitar.

Is it worth the money? Yes, I think so. It is a great tool for musicians who want to practice 50 choruses of soloing…..at whatever speed……in whatever style……in whatever key. Or perhaps you’ve like to figure out some chords for a song you were working on? Done. BinaB can help you there. Or maybe figure out what chords were played in a song? Yep, it can help you there too. So many uses for this program…..it should really be a REQUIREMENT for a Musician to own it.

UPDATE: A few of the RealTrack Saxophone tracks are Eric Marienthal. How cool is that???