Since leaving ProTools, I had to redo my default recording presets in Logic. Here is how I currently have it set up. First, I record everything at 96Khz. Why? Because I can. I think it sounds better too. More open maybe? I dunno. 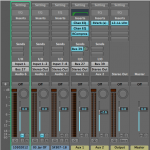 Here is a picture of my channel setups. The first track is the track I am recording to (input 1). I have the output bussed to Aux 1 on Bus 27 (could be any bus, it doesn’t matter). This Aux will have all the plugins and EQ setting setup on it. So, if I do another track, I don’t have to recreate everything.

This Aux is also mono, keeping it similar to the source material. Also, this Aux is sending some of it’s signal to Aux 2, which is for reverb. You could add reverb on this aux strip, but a this is sort of a trick I learned while mixing a CD. You have both the source and the reverb separate.
Next, lets look at what plugins I have on the Aux strip…. 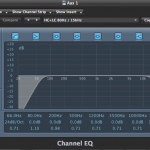 First, I have a simple Low pass on. Generally you do this to make everything sound less “rumble-ly”.

I suppose you could also do your other EQing at the same time, but I like to do this first and just keep it as the first plugin. The order does make a difference here, and I want that stuff chopped off right off the bat. Plus, sometimes when recording students, we have bleed from other studios that gets on the recording. It is usually the low end, like the bass drum from next door. A Low pass will usually get rid of this easily. Though you need to be careful not to chop too much off, a Bari Sax might get close to where the slope starts. Best thing to do is to find the spot in the recording and do a comparison of the filter on and off. 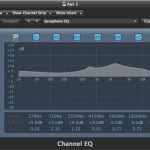 Next, I have a EQ setting for Saxophone. This was actually a Logic 9 preset, and it generally sounds pretty good.

There is a LOT of stuff you can do here. You can sometimes make crappy microphones suddenly sound great, and vice versa.

I generally start with the preset EQ setting, and then try to shape the sound to my liking. Though the raises at the bottom end generally don’t do anything, as we have them chopped off from the previous EQ plugin. 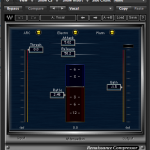 Next…..a compressor. Now, I don’t ALWAYS use a compressor, but usually do. I have the Waves Renaissance Compressor which is pretty amazing. You hardly know it’s doing anything. Logic 9 also has it’s own Compressors that are very good as well. I just had a lot of good results using this compressor in ProTools when doing a big band mixing project, and just have continued to use it. There are a TON of compressors out there, and honestly, I don’t really understand why I’d want XYZ compressor over ZYX compressor. As long as it does its job and doesn’t color the audio, I’m happy. And with Waves compressor, I’m happy.

Now, this is where you can spend a LOT of time. I mean……..a LOT of time. When I mixed a big band a couple of years ago, I spend hours and hours trying to find the right reverb for the group. 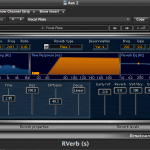 For general saxophone, I have generally been using a vocal plate reverb. Again, there are a couple of Reverbs in Logic that sound great. I am using RVerb because I spent a lot of money on the Renaissance plugins from Waves and want to get my money out of them.

When I do a recording of a student, I try to match the reverb that the Backing/Karaoke track has, so they sort of sound like they are in the same room together. I’ve found that a simple vocal plate reverb is the easiest reverb to “fit” with prerecorded tracks.

Finally, this plugin. A Waves L3-LL Multimaximizer. How would I describe this plugin and what it does…..makes things sound better? Glues them together?

It depends on the material t 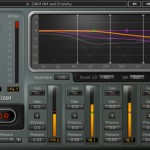 hat was recorded, but generally this plugin makes everything sound better. Logic probably has a similar plugin. Not sure. Never really have looked.

This is the current template I am using in Logic 9. It’s pretty much the same as what I was doing in ProTools, except I used a lot of McDSP plugins for EQ (I miss those, they have them in an AudioUnits format but I can’t afford them right now). I also used to use Altiverb 6 A LOT, but the version does NOT work in 64 bit mode in Logic and they don’t seem to want to update Altiverb 6 and would rather have you upgrade to Altiverb 7…..which is expensive. Anyhow, I’m always interested in hearing other people’s recording setups. What do you use?

4 thoughts on “Recording Saxophone in Logic 9”