If you’ve noticed, there have been a lack of new posts lately? “Oh no, he’s losing interest in the site. Where are we going to get our latest Katy Perry sheets?” you might say. Fear not, there are a lot of things in the pipeline. So where have I been? Busy. Actual high paying gigs, working on CDs for my students, and…..finally going paperless.

Since getting an iPad in 2010, well, actually, before that, when I decided in 2007 to get a second monitor attached to my computer in my teaching studio, I have wanted to abandon all my physical books. Actually, probably iTunes ushered in this era, where you could have ALL your teaching materials (Aebersold, other play-alongs) available instantly on your computer. When I first started teaching full time in 1999, I bought a 300 disc CD player to hold all the Aebersold volumes I had, then other play-alongs I had. I had books strewn all over the place. I had printed sheets, which some of the kids called the “Reject pile”, on the floor (songs that I had made on Finale and printed to try, but then for various reasons it wasn’t going to work for them). It was a mess. But iTunes started to change that. Spending a few months ripping my mass collection of CDs into iTunes, it was amazing. All of a sudden I could instantly pull up a Aebersold blues in F, or in C on separate volumes. Gradually the CD player was being used less and less. Now, it is still in my studio (above the DAT recorder I have). It hasn’t been plugged in for well over a year, probably two. I really don’t know.

When I put a second monitor on my teaching computer, partly to use SmartMusic (which started to put sheet music play-alongs in the program), and partly to see the songs/exercises/arrangements I did in Finale, I was stunned by how it changes your teaching. Finding stuff is simple. In the case of having something in Finale, does it need to be in a different key? Click….done. Transposed down an octave? Click…..done. And no more piles of paper.

But, I still had a huge collection of books. Aebersolds, Fishman, Snidero, more flute books that I care to count, clarinet books, oboe books, jazz books. Books books books! Great stuff in the books, but it was and still is a PAIN IN THE ASS to find something. Maybe there was an exercise in flute book X…..now where is flute book X…….oh, I can’t find it…..did I lend it out to someone never to get it back? So, sometime in 2008 I decided to scan some of my books that I use a lot.

Scanning a book though is a pain. Mainly, because they are double sided. It takes a lot of time to scan, even if you break the binding or cut the binding off. I had been using a Brother All-in-one to scan one side, then I’d have to scan the other side, and then go through and number them, then assemble them into a PDF…….it was a lot of work….but I did it for a lot of books I used a lot. It made finding them instant now, and copying a page as simple as a Command-P now. But there are still hundreds of books left……. 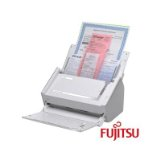 Enter my Christmas gift…..a Fujitsu Scansnap 1500M. How do I explain this…..it is like maybe being Christopher Colombus and getting GPS and a modern boat at the same time? No…..maybe getting an iPhone in 1970? That is closer to what it is. This machine was not cheap ($430 or so), but it is worth it. It does well over 20 pages a minute, double sided, high resolution. Puts them into a PDF, OCRs them…..it is amazing. In the week and a half I’ve had it (it came Jan 2), I have blown through 2 boxes of old music magazines, and probably a hundred books (a lot of them are drum books for a drum teacher….who’s paying me to do the scanning). And now I have easily tripled the number of books in my digital collection. I’m using stuff out of books I had totally forgotten about. It’s great.

The ONE downside is that I still have NOT found a good organizer of PDFs. The big issue is that I have all my digital stuff on a NAS (RAID5). I mean, it would be STUPID not to have some sort of digital insurance like that (plus Crashplan). But all the cool PDF like organizers either don’t find the OCRed text in the files on a network share (iDocument) or what to put all the PDFs into a tome (Devonthink Pro). I don’t want to put them into one tome/database file because I still want to have them in iTunes (I have playlists with the PDF and the tracks on ones that have audio tracks). So, that is the only weak link right now. Like if Devonthink would just symbolically link to a PDF and still be able to search the text there…….that would be great. Supposedly iDocument is going to add this.

So, that is what I’ve been up to. No more paper or paper books. I’m digitalizing all of the stuff I have that I use or want to use. Things seem like they are getting less cluttered in my studio as the books disappear (they go into the recycle bin once I am happy with the scan). It’s great. I’d HIGHLY recommend this scanner to everyone. It EATS paper.