This is my current pedal board, minus the Q-Tron (which was in the upper left corner of the board). 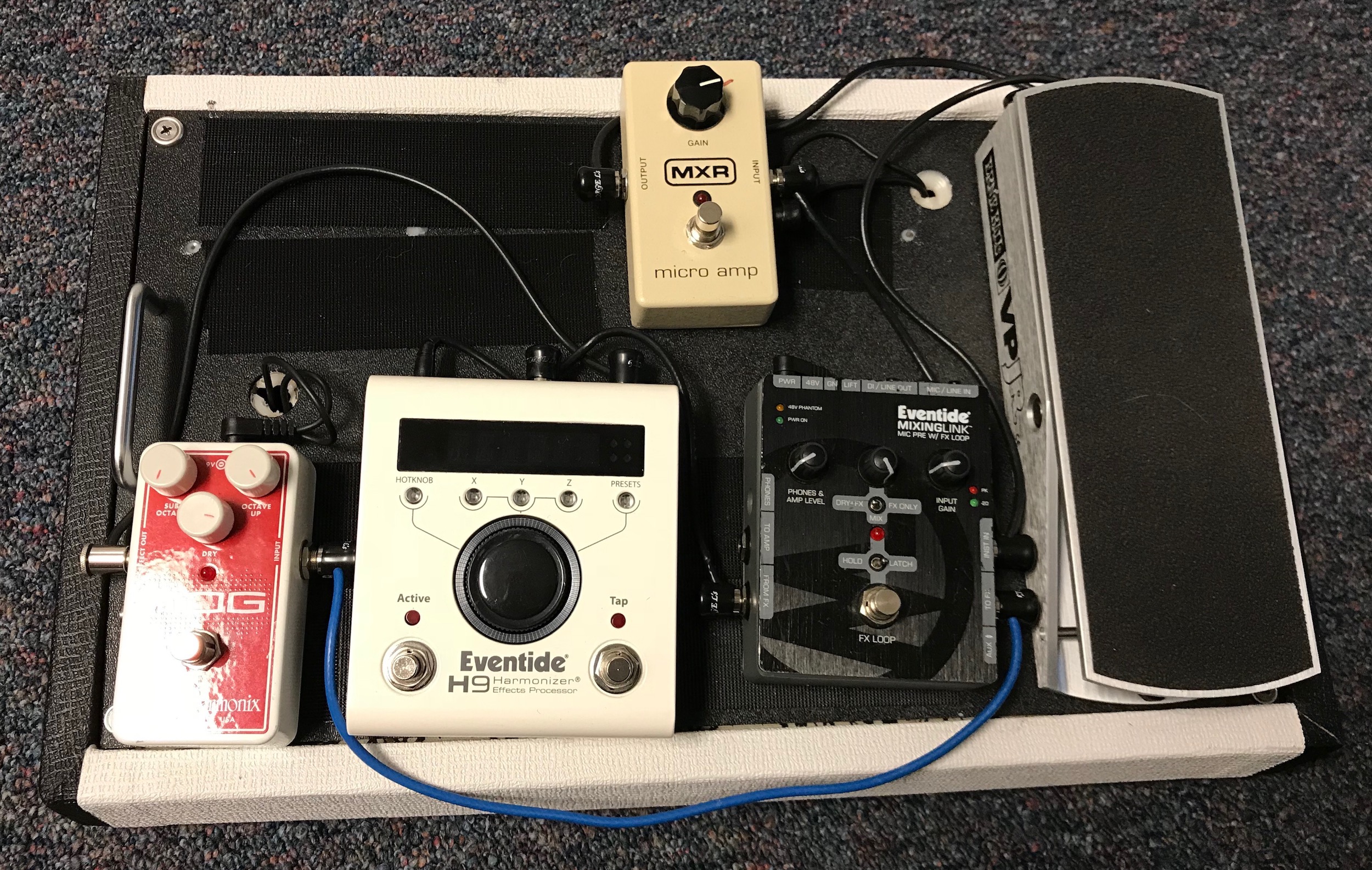 This board was designed for using an EWI and a Microphone input at the same time. One issue I have found performing is that sound people are usually very inconsistent. They are either the set it once and they leave type, or the not playing attention type. Hardly does one get a sound guy who’s actually doing their job. My biggest problem was that a LOT of sound guys

would have the EWI level too low, so when I did switch to it, it almost always was too low in volume. The solution is on the right side of the board. The EWI input comes in from the side of the board into the MXR micro amp. This gives me the ability to boost the signal, which I usually do. The signal then goes into the volume pedal, so I can tweak it even more. Then the signal goes into the Eventide MixingLink. This little box is great. You can basically mix TWO inputs and send things to effects chain. The EWI comes in the “Instrument In” input, and the microphone input I use for my sax. I can then either BYPASS the effects chain right there on the Eventide, or I can send it to the effects chain but get some of the real sax or ewi sound mixed in, or I can get just all effects.

First effect in the effects chain is the Electro Harmonix Nano POG. This is a fun pedal that you can do an octave above, and/or an octave below plus your current sound mixed in. Next effect would be the Q-Tron, which is on injured status right now. The Q-Tron is a little fickle. I have the old version, the big one like Jeff Coffin has. Pretty much the same settings he uses. What I DON’T like about it is that you cannot tell if it is engaged or not. There is no RED LIGHT to tell you it’s engaged. Maybe they fixed that in the newer versions? Final pedal is the Eventide H9. This pedal…..is……awesome. I suppose if I had the FUNDS to do it, I would have TWO H9 pedals and ditch the POG and Q-Tron. The H9 does everything. It has a great reverb. It has great pitch shifting. It has all sorts of amazing effects. PLUS, it’s bluetooth controlled, so on my iPad, I can switch between presets easily. That works great. The thing not good about the H9? You can only do ONE thing at a time on it. So, if you wanted to run the cool Pitch thing and the neat reverb…….you can’t. So, the solution would be to get another H9, or a reverb pedal. Since the Q-Tron is down for the count, and I found something on the H9 that is very Q-Tron-ish, I have been really temped…..maybe a reverb pedal at least.

Anyhow, that is the current pedal board right now. Hope to get the Q-Tron working over the weekend. Someone recommended cleaning the inputs on the 1/4″ jacks.