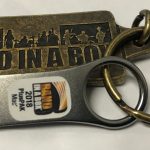 Some people think December is the best month. Christmas, etc. Some people think September when Apple events happen. Both are WRONG. The best time of the year is end of May when PG Music releases a new version of Band in a Box for Macintosh. This year they included a fancy keychain with the upgrade.

This year’s version of Band in a Box continues the evolution of a great program. 202 new real tracks, and Video real tracks (though no woodwind related tracks…..yet) are the major highlights. When the real tracks first came out, I was sort of “meh” about them (if I remember correctly, real drums were added first?). But they totally changed things around in subsequent versions. I can’t really remember the last time I used the midi tracks, the real tracks are that good. And it’s worth it to get the update just for the new tracks.

They added a “Audio Transcription” feature to the Mac version that converts a monophonic audio track to MIDI. Haven’t tested that yet. Also added were things like notation support for odd time signatures like 12/8 and 6/8, the ability to fix an out of tune recording, and a redesigned audio editor. 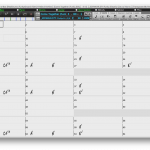 Band in a box always has worked in 4 by whatever grid since the Atari ST days. That is fine as MOST music is in a measure cadence that is divisible by 4 (8 bars, 12, 16, 24, 32, etc). But say you have a song you are working on, and it has a 7 bar phrase. It just doesn’t work as an 8 bar phrase. You put that in Band in a Box, and all hell breaks loose. It becomes a huge visual mess. Not anymore. They now will grey out and the next section starts at the far left again. Makes it a heck of a lot easier to see the flow of a song. Great addition to the program.

Couple of issues though….

Why are there TWO places where the Preferences are? 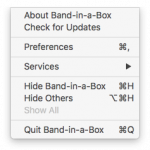 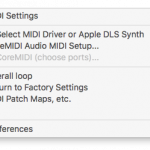 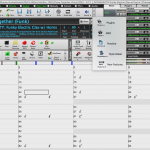 The other thing that bugs me is that you cannot decide what buttons go where. Like it would be infinitely better for me to have “Practice” be where “Video Help” is, but I cannot move these buttons around. Or even order them. Frustrating.

Other than that, an amazing program. This is a program that EVERY musician should have. From prototyping a new arrangement or song, to practicing, to even just messing around, it is a great tool to have on your Mac. Get it.