First off, the BandTool is HUGE. Look at how much bigger it is compared to my Leatherman Wave. 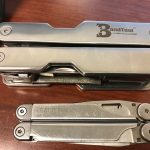 It is built like a tank. Perhaps that is too cliché. It is built like it will last 100 years. And it probably will last 100 years. I will give it 10/10 for build quality. But it is HUGE though, which is sort of a big minus as it does have some great tools on it. The pliers it comes with are not grooved, so you can grip an instrument without leaving permanent marks. The detachable small screwdrivers look great. The hooks for pulling back springs are awesome. It has all the specific tools you’d need to do some emergency instrument repair fairly well. Better than using a Leatherman, but the BandTool is TWICE as big….

It also comes with a hammer, and an adapter so you can add screw heads to it. 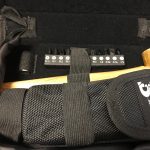 The screw head part is a little “iffy” as you have to put an adapter on it and then put the screw head in. And the adapter, at least on mine, is really loose. 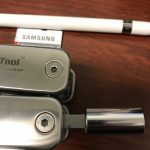 This tool is about double what you would pay for a Leatherman. Is it worth it at $175? For a teacher, yes. You can EASILY do things like get a spring back in it’s proper position during a lessons rather than trying to use a pencil or some other device to do it. And you can bend things back to their proper position more precisely and NOT leave grooves in the metal. This tool has ALREADY allowed me during a lesson to adjust a few screws and pull back a spring without taking up lesson time and not looking like some sort of fool getting the spring close and then having it pop out.

For a gigging player? Eh, probably not. I think it’s too freaking big to carry around in your gig bag. I think a guy who plays a lot probably already has a multitool in his bag. The only thing you MIGHT need would be some sort of spring puller, and you can easily craft one by getting a small screwdriver set and bending one of the small screwdrivers into a sort of hook. Or I think something from a sewing store would work as well…..like I saw someone once who had some sort of small sewing hook they had incase of an errant spring popping out.

So YES if you are a teacher, a NO if you are playing a lot. If they come out with a BT3 that is half the size and had more woodwind specific items, then I’d get that in a heartbeat. Right now, they are having some sort of sale on it, with an undisclosed discount you can apply when you buy one direct.