As we move more and more to everything being digital and available for download or to be streamed to you, some industries suffer. CNet.com has an article about Sony closing it’s Pitman New Jersey plant that makes CDs.

Kind of interesting that Sony used to have THREE plants in the USA that pressed CDs, one of them closed in 2003, and now the Pitman one is closing. I personally only get physical CDs when I go to Rasputins (used), or get something used off of Amazon.com. Though there has been a resurgence of “low-fi” and “audiophile” music, both of which seem to favor vinyl rather than CD. I do like the trend of iTunes and others upping the bit-rate and losing the DRM on the music….and keeping the price at $0.99.

Back in August of 2007 and January of 2008, a Big Band that I play in recorded two live performances for a “Demo CD”. Well, in the 2 some years since we made the two recordings, the project has become a full-blown album that is currently playing on Jazz Radio stations and available on the iTunes store. This is the multipart story of how I mixed 8 of the 17 songs on the CD.

The original idea was that we wanted more gigs, and that a lot of people wanted to hear the band before booking it, so we needed a “Demo CD”. At the time we had live recordings that I was making using my Rode NT 4, but a lot of them suffered from crowd noise, wind noise, etc. We wanted something a little bit better. So, we hired someone to do a live recording of the band. Each person individually mic’d, etc, etc. The first concert was in August of 2007, part of a Jazz thing the area puts on (though I don’t think they did it this year…..darn economy). It was held at the Blackhawk Auto Museum.

If you have been to the museum, or look at the pictures…..it is a recording person’s nightmare. Marble floors, surfaces where things bounce off of (cars, pillars, people), plus crowd noise. The crowd was there for a night of socializing and stuff, and as the evening went on, the noise became louder and louder (more on that in later). Anyhow, we had the concert, I made a live recording using my gear, and listened to it. Lots of noise, people talking, eating, dropping glasses, etc. Lots of reverb from the room (more like a Batcave to me).

The mix engineer pretty much decided that the session wasn’t going to yield a lot of material. I think he looked at 3 tracks or so. The project pretty much sat in limbo until the next concert where the scene was totally different. An actual performing arts center. A quiet audience. Acoustic grand piano (the Blackhawk gig the piano player used a keyboard). Different lead alto. Different microphones. Pretty much totally the opposite of the first recording session.

In the interval between the two concerts, I won a contest. Yeah. It DOES happen to people. So, suddenly I had stuff that was like…..pro level. Stuff I didn’t now how to use (I was a Digital Performer person since…..forever). And in January of 2008, my trusty old PowerMac Quicksilver 2002 (or my hackintosh, since I upgraded it to dual processor, etc etc) died and I replaced it with a 2008 MacPro Dual Quad-Core. The stars were aligning. In I believe March of 2008 I got to go to a mixing session. I had mentioned to the engineer that I had recently come into a ProTools setup (M-Powered), and if I could maybe get the tracks to the first concert to mess around with to get my feet wet in ProTools and whatnot. He agreed, and during that session in March, I brought a portable drive with me, and he loaded up a blank session (with like 3 edits he did) that was the Blackhawk concert. Something like 18 tracks totaling over 20 gigs of data……

Here are the ingredients of a great album and recording:
1. Great songs….Pink Floyd’s Dark Side Of The Moon…..check
2. Good arrangements of said songs…..check
3. Great players…..check
4. Record everything live, with a single microphone and no digital “wizardary” (not Pro Tools *gasp*)…..check

The sound of the album is great (seriously, no Pro Tools). Tunes are great. Just……..great! When is a “Jazz Side Of The Wall” coming out? I think a jazzed version of Comfortably Numb would be rather cool. 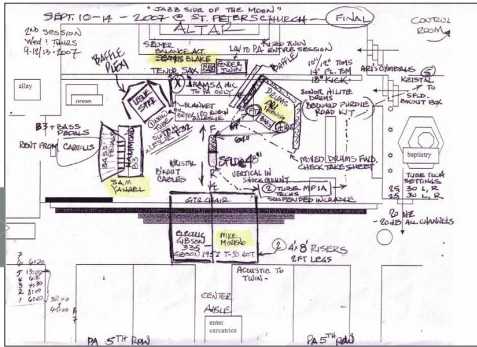 Check out the album Jazz Side Of The Moon by Sam Yahel, Mike Moreno, Ari Hoenig, Seamu Blake on iTunes or CD via Amazon.

Greg Fishman has been at it again. This time, he has come out with yet another book of Jazz Etudes. Again, he has named each Etude after a street in Chicago. I’ll just take Greg’s books in lieu of a tourist map if I ever visit Chicago. Really. I believe he’s covered every major street in the town, or at least the ones worth mentioning.

Back to the latest book. Greg says “I think that the new etudes are even more melodic than they were in the first book.” Eh, well, perhaps. The tunes in the last book were pretty good as well. I think my gripe with the first book carries over into the second book, i.e. still not a lot of explanation about voice leading. Perhaps that will be in a forth coming tourist’s guide to voice leading? How many streets does Chicago have? Are we going to run out if you do a voice leading book and another etude book?

For $19.95, with two CDs (one for Tenor, one for Alto) that have an etude track and a track where you can blow a few choruses, it is a simple choice. Duh! Get the book! 10/10 for the price, and the quality of the tunes.

(P.S. Greg Fishman is moving to Phoenix, Arizona. Why anyone would want to move there is beyond me. It gets so hot it can melt your dashboard. This last summer I think they had weeks of triple digit heat. My mom visited my brother who lives there, and she said it was like being in an oven the whole time she was there. Anyhow, I’d expect to see the next etude book filled with Arizona street names, assuming Fishman runs out of Chicago streets)

Two related items I finished recently. The first is a very interesting CD, Marcel Tabuteau’s Lessons, which Tabuteau himself explains his phrasing system. Well, it is more than that, it is lessons on music from a great master. It was started in August of 1965, using a tape recorder in Tabuteau’s apartment, and abruptly finished in 1966, the last recording made the day before he died (or, as Tabuteau called it, his audition date with St. Peter). It is oboe specific in areas (reeds), but most of it easily applies to saxophone (or any other instrument for that matter). Well worth a listen if you want to gain insight from a master on how to play music.

The second item is Note Grouping by James Morgan Thurmond. This is basically a written down version of what the Tabuteau CD is. Same idea, different author. Keep in mind, this book was originally a thesis paper, and reworked/written to be a book. Parts of it are very “thesis paperish”, but the information contained within is invaluable, especially the insights into how modern music has come about.

For style and sound, all these books are excellent….

You’d be hard pressed to find a better sound on Alto than Jim Snidero’s. On tenor, previous versions of the book have featured Walt Weiskopf and Eric Alexander, who are excellent players. However, I think Ted Nash’s sound is great in this book. I’d say better than the other two (but that is just my opinion).

The book’s tunes. Honestly, the tunes (or etudes) in this volume are lack luster. The first tune, “Splank Street”, has a great sound to it, but the tune never goes anywhere unlike in previous Jazz Conception books (IE: Basie’s Blues). “St. Sonny” is ok, “Confirmed” and “Freedom” are good. But there is nothing that just screams “cool” to me. In the original Jazz Conception book we had a ton of cool tunes like “Passages”, “Bird’s Blues”, or “Groove Blues” to name a few. But this volume, they are playable, but….not memorable.

Rating. It’s a solid edition to the Jazz Conception series. I give it a 8. I love Ted Nash’s playing in this book. But the tunes are not as good as they have been in previous Jazz Conception books. I’d still love to see Jim Snidero tackle a more contemporary play-along. Something that is really lacking out there.

I just picked up a copy of Tim Ries “The Rolling Stones Project”. I have to say, this is probably the best CD I’ve bought in 2005. I can’t think of another CD that I bought in 2005 that was better. Seriously, I think the industry needs to stop doing American Idol and other cheese things, and get back to producing good music.

On the Worst side, the RIAA lawsuits. Here is a great clip of a CNN interview with a person being sued and the RIAA head. Wow, talking about blinking. And here is another guy challenging the suits. I think if an album is good, and reasonably priced, people will buy it (HINT: Around $10). Also, a potential problem for the Recording Industry in the form of Spitzer. What? Price collusion? The RIAA? Never…..not in a hundred years…..

Greg Fishman has released a great new book titled Jazz Saxophone Etudes. What sets this book apart from others is the addition of two CDs, one for Alto and one for Tenor. You use the same etude for both instruments. So, you don’t have to deal with bad transposition jobs that you find in say, Bob Minzter’s books. Plus, the CDs feature extended rhythmn section only parts that allow you to stretch out and play on the tunes.

The tunes are based on standard changes. There are two blues etudes, two rhythmn changes etudes, and etude based on the changes to “A” Train, etc. All the etudes are named after streets in Chicago, which figures as Greg Fishman is from Chicago.

The one thing I would want more of in the book is voice leading. It would have been great to include the voice leadings to the solos, along with some analysis of what was used. It was mentioned briefly in the front of the book, then….nada. It would really make this book stand out if it had detailed, one page sheet on the voice leadings used in the solos. Anyhow, I’ve done a bunch of them for my students so they can see how he constructed the solos.

Rating for this book. 10/10. For $20, this book rocks. You get excellent solos, great sounding CDs, and a lot of information. Go get it!