There are some other “features”, but these are the ones that are interesting. Especially the last one. The update is about 80 megs for Windows, 97 Megs for Mac. So, how does it work? In a word, the same as before…. Basically, they updated it to support OS X 10.5. That was it. They have this new “HOME SCREEN”…….. 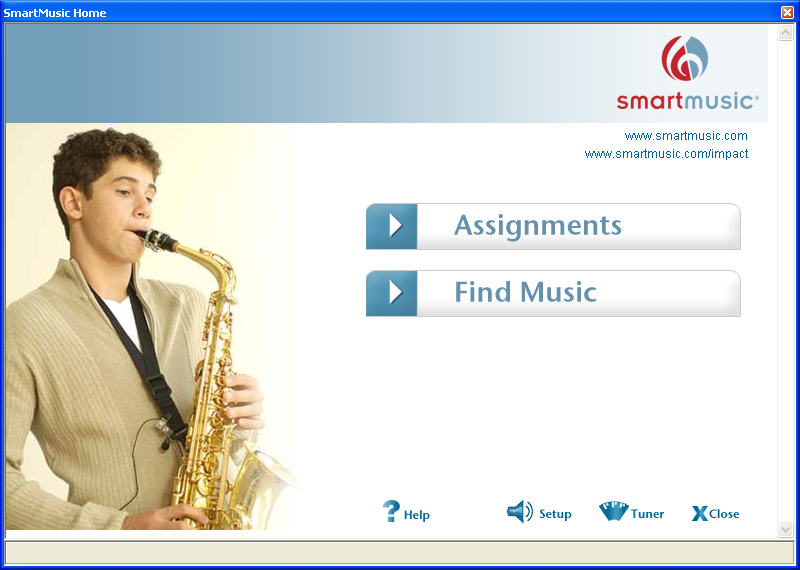 which, basically, replaced the older one which wasn’t much different. It didn’t have the cute little pictures of kids playing. *Yawn*. You get dumped to this new home screen all the time, and it doesn’t remember where you last were on it. So, if you had clicked find music before leaving the home menu, SmartMusic 10.2 doesn’t remember that. What I’d like to have seen is perhaps it using the screen more, and having a long list of what you recently played, instead of it being buried under 3 clicks, and having it be a little pop-up window. That would have made the home screen more useful. Or maybe have the home screen take up the whole screen, and have the options display to the right after you click things. There are a lot of things that could make it more appealing. Closing the home screen, you get the same interface that looks like it came out of the 80s. 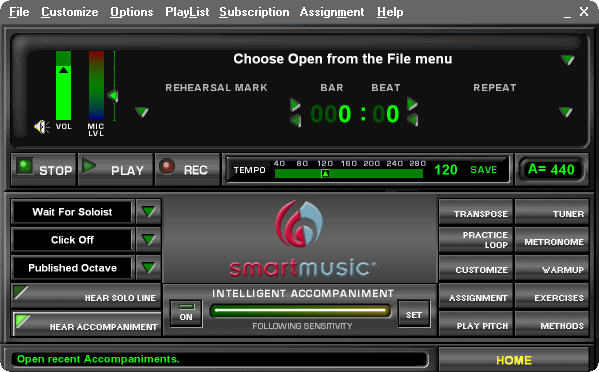 I still think this thing needs to be redone. It has to be the most retro thing in smartmusic. Why not make it bigger, and have an active tuner going? So, people can see how their pitch is while they are playing. Or make it more game like and have a running tally of your “score” while performing a piece? Granted, this screen doesn’t come up much anymore, but a version of it exists when you have music on the screen.

Again, it would make a lot of sense to make the strip at the top a lot more functional. Have a pitch meter. Have some sort of “score” happening. Kids would like that, they like games or trying to beat stuff. Make the bar and beat and the repeat thing bigger. Use the real estate.

Oh, and the Library Browser thing is exactly the same, and still is the weakest part of the program.

You still cannot make multiple playlists, which cripples the smartmusic for a teacher. Being able to have student playlists, or playlists for instruments would make SmartMusic infinitely more valuable. The whole browser is not intuitive. Why can’t we select “Alto Sax” and just have all the Alto Sax parts displayed? Currently, you get to see every single part. Or how come users can’t add their own ratings to songs? Or write notes about it? These seem like really, really simple additions that should have been added to a .2 version of a program.

The “Create assignments with audio-quality accompaniment for any concert selection. Simply upload the audio file and distribute sheet music; then your band, orchestra, and choir students can practice their part with accompaniment in SmartMusic.” feature I cannot find. Perhaps I’m missing it, but I don’t see anything to do this. Maybe this is part of the Impact thing? Or something that an update to Finale 2008 will do? I don’t know.

Verdict? It is a free update, but SmartMusic 10.2 offers nothing new except for Mac OS X 10.5 (Leopard) compatibility. The new Home Screen doesn’t fix any of the problems SmartMusic has. It is a mere band-aid. Revamp the Library browser, and really make improvements to make the program intuitive rather than saying they have is needed. With the frequency that MakeMusic comes out with updates to SmartMusic, I’m wondering if they will ever will fix problems or, as they do with Finale, ignore them and pretend they do not exist. This program is still good to have, especially if you can get it for the $25 a year price. The shear number of Concert Band songs will keep anyone occupied for a long while. MakeMusic does update date the library, but it is hard to figure out what is new when they do (unless you go to the website, which usually is delayed in reflecting the additions).

7 out of 10. Points deducted for generally frustrating interface and a host of bugs (like my on going microphone issue). I’ll be doing a review of running this on Mac OS X 10.5.2 when I update my Mac to run it.