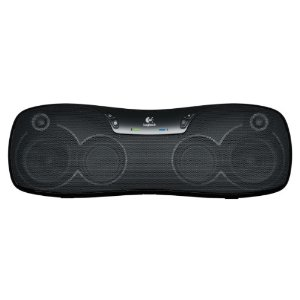 I was in need of a portable speaker for teaching and what not. There are SOO many iPhone/iPod/iPad accessories out there, what one to get?

I decided to get the Logitech Wireless Boombox. It has proven that it performs really really well for me. You can pair it wirelessly (bluetooth) to 8 different devices. In theory that works, but it’s a little flakey in my usage of it. My iOS devices frequently forget or can’t connect to it. Luckily it’s really easy to pair it back up again. Or you can use the included adapter cable to run the audio out of your device into the Boombox. Supposedly the sound isn’t as degraded as it is over bluetooth. I didn’t really notice anything between a wired or wireless audio connection.

The Logitech Wireless Boombox has a built in rechargeable battery. It doesn’t add much weight to the device, and supposedly it lasts about 6 hours. Haven’t tested that. Though the sound quality is quite different when running on the battery. The bass goes away, and the overall sound level drops. When the Boombox is plugged into the AC adapter, it sounds AMAZING for it’s size. Great bass, loud, and generally kicking ass. On battery? Meh….it’s OK…..not great, but do-able.

Could you practice with this? Yes, if it is plugged in. Otherwise, it might not really cut it if you are playing some loud sax or something, but you really want it plugged in all the time because it just sounds a lot better. Almost night and day better.

Ok, now this guy is rocking technology. He’s using a Yamaha WX 5, TouchOSC and an open source program called PureData. Just watching this opens up a LOT of interesting ideas. Like using the TouchOSC to control loops, or change patches, or apply filters, or…….the things are endlessly possible.

Yes, the iPhone/iTouch is amazing. 100,000+ Apps. A lot for free. There are a few diamonds in the ruff, and this one is looking like another find.

RelativePitch is an an iTouch/iPhone app that will drill you on intervals. There is a lite version of it as well. The interface is OK, but I have a few complaints about it. The application does not, at least in the lite version, allow you to vary the root note. Maybe the full version does this, I dunno. Second, the intervals are always UP, as in root then the note above. Down would be a great thing to have in this app as well. Perhaps the full version does it. It would be simple enough to add in an update.

The price? $7.99. Forget that. If the developer knocked it down to $1.99, maybe. You’d be better off searching the web for various free trainers, like http://www.trainear.com/. Hopefully someone will do a better version for the iTouch/iPhone soon. Or a cheaper version. $7.99. Come on people!

The Apple iPhone/iTouch software market is amazing. Games, tuners (like the great Strobe tuner). Even AutoTune things like I Am T-Pain.

Now, there is the Pitch Primer for the platform. It is amazing. Transcription tool? Sure it could be. Amazing practice tool? YES! Amazing idea? YES! It is easiest to see a demo of it. Things that I’d like it to do would be EXPORT the audio you recorded (several other iPhone/iTouch programs can do this). And it would be killer if it would export things as a midi file. Or Music XML file. 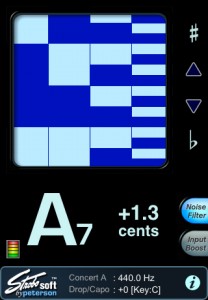 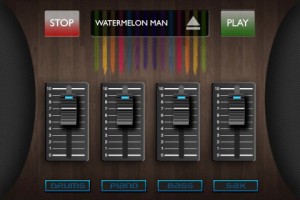 Unless you have been living in a cave for the last week, you know that the new version of the iPhone is out. The iPhone 3G. The other thing that is out is new software for previous iPhone/iPod Touch owners. The new version of the system software supports applications. There are lots of games and stuff out. But there are TWO music ones that are worth a look.

The first one is Karajan Beginner. Theory trainer and stuff. There is a paid version of this as well which I imagine expands on the drills.

The second one is GuitarToolkit. Yes, it is more geared towards guitar players, but the tuner and the metronome are excellent. I thought it was a good $10 spend for a tuner and metronome, though it would be nice if you flipped the iPhone over, it would flip the tuner over. Perhaps the next version.

The potential of a touch interface is amazing, as exhibited by this video I found at Gizmodo:

Lots of potential for all kinds of interesting things. Now where is the saxophone sound??