Discovering Google Reader is both a blessing and a curse. A blessing because I now am updated on a TREMENDOUS amount of stuff I’m interested in. Curse, because I now monitor SaxontheWeb. Generally, the posts there are…..subpar to be nice. However, there are occasional questions that come up that some try to answer thoughtfully. Like this one on Can Bleach Damage a HR Mouthpiece.

As an owner of a Vintage Meyer Brothers Hard Rubber mouthpiece, and the owner of two Hard Rubber Slant Signature Otto Links, I’d NEVER SOAK my mouthpieces in Bleach. At all. Period. Even diluted. Period. My practices in cleaning a mouthpiece are to use lukewarm water, antibacterial soap, and a old soft toothbrush. I mildly scrub the mouthpiece out with the toothbrush and soap. That lasts maybe 30 seconds. I wash it off, then if there is some calcium deposits, I use Doctor’s Products Mouthpiece cleaner to remove them. This stuff works really well. Then, if I still want to make sure it is clean, I’ll take a Clorox Disinfectant wipe and run it over and through the mouthpiece (these don’t have Bleach).

Done. The short version of cleaning, like when I put on a new reed, is to run a Clorox Disinfectant wipe through the mouthpiece and on the outside. I think every other time (or every few months) I’ll do the more involved cleaning described above.

Most of the time saxontheweb is annoying, but sometimes a gem comes out. And here is one such gem….a mouthpiece rack. 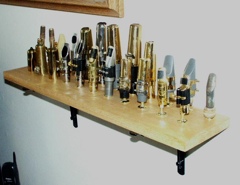 Now it seems the world of advertising of products has now reached youtube. Saxgourmet (love em or hate em) has a fuzzy video up pawning his products on the net.

Personally, I hate youtube videos like this. A thought out script, and perhaps high quality still pictures of the mouthpieces with a well written dialogue would have been better than this. Or naked women……..or clothed women……..

Last year, I didn’t do a Christmas guide. This year, I am going to. What holiday gift would you get your favorite saxophonist(s) this year. Here are some ideas.
Under $100

The Sky Is The Limit

Any other gift ideas?

Saxcessful writes “I have been playing a Berg 100/0 on my tenor with various reeds, depending on the mood. Recently I have been offered (on the net) a Beechler Bellite 8 which is about the same lay but I have no idea about what sort of sound they produce. I am familiar with a Lawton 6 (a friends) and also play a modified Otto 7. I like all the sounds that I can get out of these mouthpieces but “the” sound alludes me. I would appreciate comments about the Beechler as they are not too common here in NZ and they are rather expensive. Thanks….”

Yes. “the sound”. We all know what you mean. You can’t describe it, but you know what it is. I haven’t used a Beechler since………..um……..Clinton was in the White House. Beechlers, as I remember them, were really punchy mouthpieces. I would describe them as similar to a metal Berg Larsen, but without the body (or tone). I would really suggest trying one before buying it, otherwise you might be stuck with something you don’t use. I mean, I think we all have that mouthpiece box (or boxes) of various pieces you liked for a week or two, then discarded.

pika writes “What do people think about the metal mouthpieces with spoilers? How much louder do they make you sound(tener sax) because i was thinking about getting one for marching band. Email me if you know anything.”

First off, we don’t “email me if you know anything”. That also goes for people who “please email your XXXX arrangement”. You won’t believe how many times a week I get that. It is so Middle School.

Back to your question. A baffle indeed makes your mouthpiece louder. I think that is what you mean by “spoiler”. It would make a metal mouthpiece louder obviously. However, it does change the quality of the tone you get out of the mouthpiece. I tried Power Tone Baffles briefly on alto, and did not care for them. I got more volume, but the tone just didn’t sound good.

There is another thing you could try. If you put some paper underneath the reed (where the reed and mouthpiece contact), that will give you a little more buzz and power.

"Jey Clark, owner of Saxology in Berkeley, Ca, passed away last night after suffering a massive stroke on Sunday. I have no other details at this time, but the information was confirmed this afternoon in a conversation with his friend. Jey was a long time friend, a frequent visitor to my home, played his ass off, and made me laugh. I'll miss him."

Once upon a time I tried out some mouthpieces from him (when he ran Four Winds). I believe I have a vintage Berg Larsen alto mouthpiece I bought from his shop over ten years ago. Good guy to deal with as I remember.

I got to spend some time with the great Don Menza tonight. It was very good. For those of you who don’t know of Don Menza, you need to sell your saxophone. Now!

Don Menza is a very gifted woodwind player who is probably most known for his stint with the Buddy Rich big band. But, Don Menza is deeper than that. Don is a very active in the music and teaching scene, and he is playing all over the world currently. In fact, he says he keeps a horn in the various locations he goes to rather than carrying a horn around….but that is another story.

Anyways, Don Menza had a stories about everything. I didn’t get to hear any of the famous Buddy Rich stories (or horror stories) because I got there a little late (maybe Rory could fill us in?). He retold a great story of seeing Charlie Parker playing live, with Strings. He said Charlie Parker’s sound was big, kinda like a tenor, and would fill the room. He said Charlie Parker’s play looked like he wasn’t play because his fingers were soo close to the keys. He also had a story of how Charlie Paker’s playing changed after playing 2nd Tenor in the Billy Eckstine band. He was playing second the Gene Ammons. Don insists that you can hear a trading of ideas between Gene and Charlie after that time.

Don is also insistant on mouthpieces. He doesn’t buy that “this mouthpiece will make me better” arguement. I remember seeing him in 1995 or 1994 at the IAJE in LA, and he did this demo of sounding the same on 3 different mouthpieces. The $500 special, the $100 middle of the roader, and the $5 special. It didn’t matter, he made them all the same. I think he now likes old Otto Links that he strips the rubber off of. We didn’t get into details about that.