I was digging through my archive of Finale files, and there is this gem in there. I think I got it when I was a member of the IDRS. It’s good for Oboe and/or Saxophone.

Barret 12 Articulation Studies (153.0 KiB, 150 hits)
You do not have permission to download this file. Go register first.

Barret 12 Articulation Studies (iPad formatted) (159.4 KiB, 38 hits)
You do not have permission to download this file. Go register first.

I almost won this item on ebay. A Chedeville Oboe Mouthpiece. 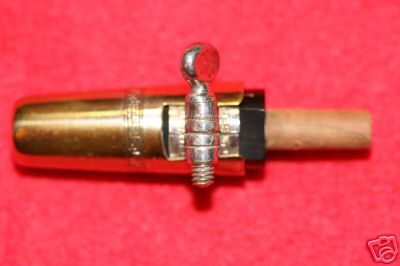 Wow. It got to pricey for me. Plus I just had to shell out a lot of money to the IRS. 🙁 Interesting discussion about it here. Seems it isn’t so great. Looks kind of cool though. Probably would help out some poor doubler out there than wanted to add oboe to his weaponry.

Here are some pictures taken off the auction

There are a number of books out there that are for Oboe that have been adapted for Saxophone. Ferling’s, and Rossari’s books would be two examples. Another great book to check out is “Vade-Mecum of The Oboist” by Albert J. Andraud. The 200 page, over sized book contains 230 selected studies (some from Ferling) and Orchestral excerpts to hone your skills. Though it is for the Oboe, it works great on saxophone. This book does not pull any punches. It starts hard and keeps it there.

For those looking for some technique etudes, this book will not disappoint. 9/10 (1 point deducted for the oversize of the book which I don’t particularly care for).

It’s not as bad as everyone says. In fact, it is a beautiful instrument, and great classical works composed for it. The only issue I have with playing Oboe is reeds.

Right now, I’m using reeds made by the Alan Double Reed company. I really like the Medium Hard Concert reeds they make. But, to truly know the instrument, I decided this summer to learn how to make an oboe reed. I purchased a reed making kit that included some gouged and shaped cane. I also was armed with a copy of “The Art Of Oboe Playing” which has a great guide to reed making guide.

Long story short, I still don’t know how to make an oboe reed. I have yet to make it past the binding the reed to the staple part. Erg. If/When I get past that, then we come into the whole scraping/shaping thing. Maybe I need a good video of the whole process….

Single reed players have it good, but, are there any people out there that actually make their own saxophone reeds? I know that I have, in the past, shaved and trimmed some reeds to make them play better. But to construct a playable reed from a blank? Is it worth it?

Two related items I finished recently. The first is a very interesting CD, Marcel Tabuteau’s Lessons, which Tabuteau himself explains his phrasing system. Well, it is more than that, it is lessons on music from a great master. It was started in August of 1965, using a tape recorder in Tabuteau’s apartment, and abruptly finished in 1966, the last recording made the day before he died (or, as Tabuteau called it, his audition date with St. Peter). It is oboe specific in areas (reeds), but most of it easily applies to saxophone (or any other instrument for that matter). Well worth a listen if you want to gain insight from a master on how to play music.

The second item is Note Grouping by James Morgan Thurmond. This is basically a written down version of what the Tabuteau CD is. Same idea, different author. Keep in mind, this book was originally a thesis paper, and reworked/written to be a book. Parts of it are very “thesis paperish”, but the information contained within is invaluable, especially the insights into how modern music has come about.

yampol writes “As long as we’re talking about doubling on oboe, let’s talk about jazz oboe. The first player that comes to mind is the amazing multi-instrumentalist, composer, educator, band-leader Yusef Lateef. His Eastern Sounds and Three Faces albums made a very strong impression on me. Check out the track “I’m Just a Lucky So and So” on the Three Faces album.

Anyone else have a favorite jazz oboist?

I don’t recommend the album with Bob Cooper and Bud Shank. They did an album that was jazz flute and jazz oboe. Bob Cooper played Oboe. I couldn’t bear it. I love Bob Cooper in Bob Florence’s band, and in solo albums, but his jazz Oboe….unbearable to me.

Update: 04/22 18:25 GMT by E :You know, I posted this story, and low and behold iTunes decided to put 2 of those Bob Cooper/Bud Shanks songs in my Random Selections Smart-Playlist. I still think Jazz Oboe is not cool. Hopefully someone can point me to something to change my opinion.